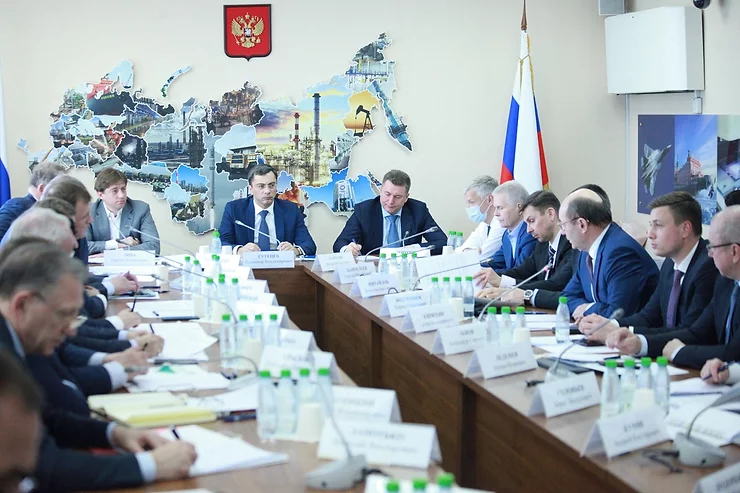 On April 12, 2021, the State Duma hosted the first meeting of the Expert Council for the Development of Transport Engineering under the State Duma Committee on Economic Policy and Industry.

At the meeting were discussed the implementation of the import substitution program in the transport engineering industry, creating conditions for reducing the financial burden, increasing attractiveness, and guarantees for the scientific and production block of enterprises focused on creating domestic products.

The event was attended by Vladimir Gutenev, coordinator of the Expert Council for the Development of Transport Engineering, First Deputy Chairman of the State Duma Committee on Economic Policy and Industry, First Deputy Chairman of the Union of Machine Builders of Russia; Kirill Lipa, General Director of JSC Transmashholding; Alexander Morozov, Deputy Minister of Industry and Trade of the Russian Federation; Dmitry Raenok, Director of the Tula Research and Production Complex of the PTK Group; representatives of industrial enterprises, banks and development corporations, deputies of the State Duma.

The participants of the meeting noted that by implementing the program of import substitution in the industrial sector, it is necessary to create conditions for reorientation from foreign suppliers to manufacturers of domestic component base, to achieve full localization of software for key positions of machine-building products.

Considering that transport engineering is one of the strategic sectors of the Russian economy, the Ministry of Industry and Trade of the Russian Federation currently identifies three priority areas for its development. We are talking about increasing the localization of products, greening production (switching to hydrogen transport), and introducing digital technologies. It was noted that active work is underway on the introduction of a universal point system for assessing the level of localization within the framework of the current decree No. 719 , both for final products and their components.

One of the most important areas of work of the domestic transport engineering, which can ensure its competitiveness, should be the creation of rolling stock with a low carbon footprint, according to the Deputy Minister of Industry and Trade of the Russian Federation Alexander Morozov. Taking into account the new challenges in the development of hydrogen energy and transport, the state is ready to continue to support projects for the creation of hydrogen rolling stock and its key components.

Kirill Lipa, in turn, noted that "The topic of import substitution in industry is acquiring a completely new sound - it is a question of the ability to ensure the long-term performance of critical infrastructure, in our case – transport." He drew the attention of the audience to the fact that over the past years TMH has been carrying out systematic work on the implementation of projects aimed at import substitution, for example, the volume of investments in the organization of new production of electrical equipment for locomotives at its own facilities amounted to more than 1.2 billion rubles.

Kirill Lipa positively assessed the work on the introduction of a point system for assessing the level of localization of production of railway engineering products in Russia: "It is a tool for an objective assessment of the work on import substitution, which allows us to provide effective support to domestic industrial enterprises. The introduction of the points system will provide support to domestic enterprises, develop their own component base, and increase the overall level of localization of products".