Certificate of the "Book of Records of Russia" 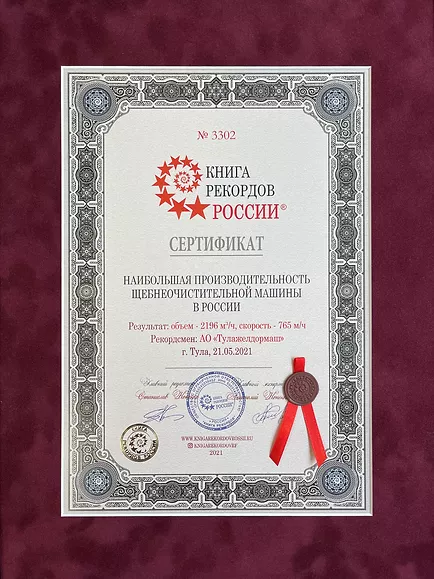 On May 21, at the head office of the PTK Group in Moscow was held a solemn presentation of the certificate of the "Book of Records of Russia" for the established record: "The highest productivity of a ballast cleaning machine in Russia".

JSC "Tulazheldormash" is one of the oldest enterprises in Russia, which are part of the multidisciplinary industrial and engineering holding of the PTK Group, specializing in the production, repair and operation of railway equipment. Currently, the factory is one of the largest manufacturers of heavy track equipment and equipment for the construction, renovation and maintenance of railway tracks "Space 1520". More than 2.5 thousand units of machinery and lifting equipment manufactured by JSC "Tulazheldormash" operate on the railways of the Russian Federation and the CIS countries.

In autumn 2020, were carried out an operational tests of the technology of high-speed ballast cleaning by using the SCHOM-2000 machine at the Belorechenskaya station of the North Caucasus Railway. During the tests, was achieved a ballast cleaning speed of 765 m/h. This cleaning rate is more than twice the performance of domestic and the best foreign analogues.