The legendary armored train No.16 passed through Tula. 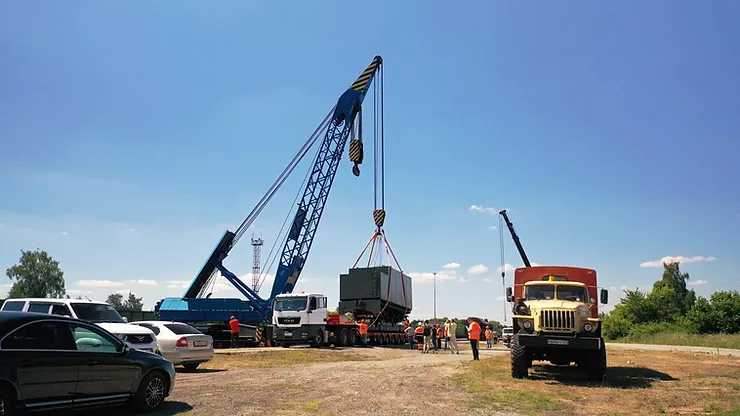 The legendary armored train No.16 passed through Tula. The train model defended the city of armorers in the fall of 1941 will be installed in the Patriot Park on the initiative of Governor Alexey Dyumin. Railway car weighing 50 tons will be transported on public roads from the railway station "Prisady".

The textile cable is as thick as a hand and can withstand loads of tens of tons. This is exactly what is required if an entire railway car is going to be lifted into the air. The metal machine needs to be moved from the railway tracks to a sliding cargo platform – a low-frame trawl. This is how rail transport is prepared to travel along the Tula highways.

The layout was mounted on the basis of a 1952 steam locomotive, which was brought from the South Ural railway. In the shed "Uzlovaya" the locomotive and cars were sheathed with sheet metal, restoring the appearance of the famous armored train. Then the train was delivered on rails to the station "Prisady" Kireevsky district. From here, the exhibit will be transported in parts to its destination.

The task is unprecedented – to transport an entire car weighing almost 50 tons around the city. A road train 20 meters long and 5 meters has high risks catching low-hanging wires, gas pipes and road signs. Such a large truck on turns and exits cannot pass without help of traffic police, who at this time stop traffic on the other lanes.

Exhibit in the Park "Patriot" will be significantly different from its predecessors – armored trains at the stations of Tula and Chern. Its internal exposition will be equipped with modern multimedia equipment, and the composition will be supplemented with an authentic ambulance railway car that participated in defensive battles. Private investors, such as Tulazheldormash and Locotech, also took part in the creation of the monument. The installation of the train was timed to the 75th anniversary of the Victory in the great Patriotic War.